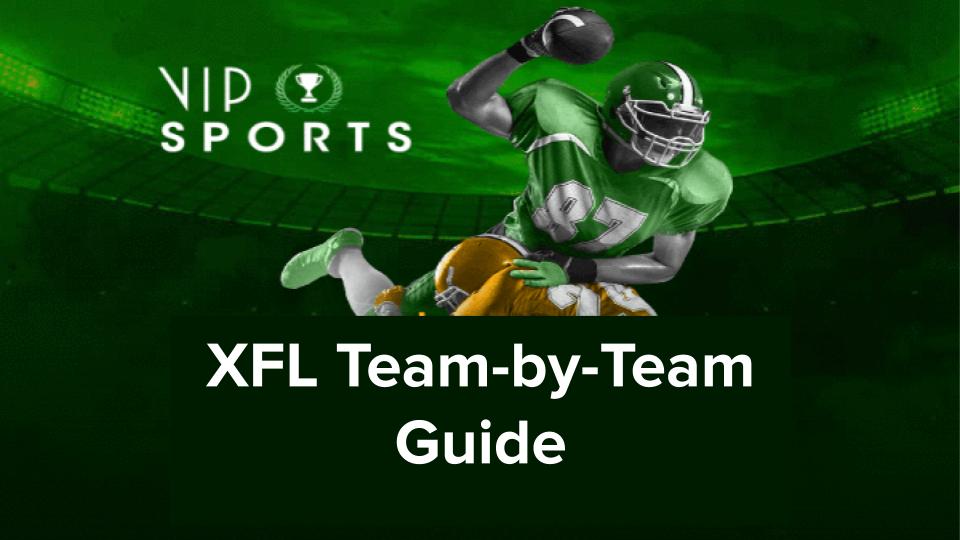 So here we are at the opening weekend of the revitalized XFL competition. Our XFL season preview will cover each team and our picks for the weekend’s games. There are 8 teams going head to head over a 10-week period with no bye weeks. It is broken up into the West and East division. The XFL league is a remastered version of an attempted XFL  back in 2001 that ran for one season. The league is owned by Vince McMahon’s company Alpha Entertainment.

The XFL season has made numerous rule changes from the NFL to make the game move faster and encourage exciting plays. Some of these include double-forward pass, extra points after touchdowns and overtime method. We are going to break down every team and there chances of winning the XFL as well as the weekend games.

The DC Defenders open at +600 to come out on top. The DC Defenders are a decent longshot bet and should have one of the more enjoyable offenses throughout the season. Cardale Jones, a former National Championship quarterback, will lead the team. Partnered with former NFL receivers Simmie Cobbs and Eli Rogers on the roster they could certainly rack up some high scoring games.

An unfortunate start Coach Pep Hamilton is losing Jeffrey Fitzgerald, their defensive coordinator. Ironically for a team called the Defenders they could have issues when not in possession of the ball. If they can get their offense going throughout the season defending may not be a major priority. The defenders open as favorites for their opener against the Seattle Dragons at -7.5 against the spread. We think that DC will make the playoffs and finish 2nd in their XFL East group due to sorting out a poor defense. If they make it to the playoffs the Defenders should win the tournament.

The Guardians are second-favorites to finish this season as XFL champions. They are +375 here at VIP to end up on top. Being led by Matt McGloin a former Raider’s QB. New York looks like they are designed to be effective running and passing teams. Kevin Gilbride is coaching the Guardians. He is the oldest head coach in the league.

The Guardians open at as +2 against the spread against the Tampa Bay Vipers. McGloin will be key to the New York offense and could be one of the best quarterbacks in the XFL league. There is a lack of standout talent in the team but that’s not uncommon for every team. With Matt McGloin on form the Guardians they will likely make the playoffs, without him carrying the team then the Guardians will have a lackluster season.

The BattleHawks are outsiders at +1000 before the first game. Christine Michael looks like the main runner for the BattleHawks. Jordan Ta’amu will be the main Quarterback and will have former NFL talents Matt Jones and Marquette King alongside him in their roster. Ta’amu is not coming with a lot of expectations. He has the potential to be a standout in the XFL or he may just quickly fade to average.

St. Louis has the potential to come out firing but looks more likely to suffer some early-season woes. If the BattleHawks start off slow it is unlikely that they will pick up any sort of form. St. Louis won’t make the playoffs and will likely only pick up 2 or 3 wins throughout the season.

The Vipers are third-favorites to win the XFL at +500. Aaron Murray the former Georgia Bulldog is going to be leading the line. Head coach Marc Trestman also has Seantavius Jones and Rannell Hall at his disposal. They are looking like a dangerous team on offense. They are lacking in defense and are at a loss since Antonio Callaway suffered a season-ending injury during a training session.

Tampa Bay will start the season off strong with a good offense, but the defense will be found out as the season progresses. They will fight for second place in the XFL East and depending on their how strong their start is 6 wins could seal a playoff spot.

The favorites to win the XFL. They are +325 to win outright. Under former Oklahoma head coach Bob Stoops. Landry Jones is the main player for Dallas and is currently looking like the face of the XFL. They have built the most balanced roster with some of the best-known talents in the league. They will be a force to be reckoned with throughout the season.

Their first game is against the BattleHawks and Dallas should come away with a win. Between the balanced roster and experienced coaching, it is looking like the Renegades will go all the way. One bad game in playoffs could end their season but it would be a major shock if Dallas didn’t make it that far.

The Houston Roughnecks are coming in at least favorite in terms of odds. They open up at +1200 on VIP Sports. They have an exciting QB option with Connor Cook who just got beaten to the starting QB position by Philip Walker. Junes Jones is the head coach and usually opts for a passing offense that is quick and releases the ball early. Houston is pretty balanced all round and may not be that far off playoffs with a run n’ shoot style.

There will be plenty of support for the passing game with a wide receiver such as Sammie Coates. The Roughnecks are more capable of a side than the odds would display. Their game is limited as they don’t have a tight end on their roster so probably won’t have too many run options on the roster. We see them making the playoff due to a solid back up QB but will bow out of the first game.

The LA Wildcats are predicted to be middle of the pile with the odds. They open this weekend at +550 to come away champions. Former NFL Josh Johnson is leading his team in offense. Having Nelson Spruce and Tre McBride as the main receivers don’t install much confidence in the offense. Shawn Oakman is going to be playing his first football game since winning the Senior Bowl MVP in 2016.

I see the Wildcats finishing with a poor XFL season. They won’t impress much with weak receivers and an average defense. I see them getting 3 or 4 wins but won’t make a playoff game.

The Seattle Dragons are not on top of the group by any means. The fact that they open at +1100 on VIP Sports shows they are not a powerhouse. Brandon Silvers is their quarterback and has very little quality in terms of receiving options. It is likely that the Dragons will opt for a more running central game. I can see them pop up with one or two good performances but in general, I think the odds are right on this one. Expect them to come bottom in the division.

The Seattle Dragons are unfortunate to be away to the Defenders in their first game. The Defenders will be happy to try their defense out against the Dragons with the loss of their defensive coordinator. Take the Defenders at -7.5 against the spread at (-114). Seattle may try to take advantage of D.C.’s suspect defense but will struggle with their offense.

Take Roughnecks in this one. Get them -6 against the spread at (-114) here at VIP Casino. Houston just has more potential than the Wildcats. LA will just struggle to put points on the board and will have a disappointing first game.

The Vipers open up at -2.5 favorites against the spread. This game could go either way depending on which offense is firing on the day. The fact New York has the home advantage coming into this one I would take them at +2.5 against the spread at (-115). The winner in this game should kick off a strong XFL season.

The Renegades have one of the most talented rosters in the competition. They are -10 against the spread for this one against St. Louis. Landry Jones is a doubt for the first game and -10 is a bit of a stretch missing the face of the XFL. I would either take the BattleHawks at +10 at (-127) or just take the Renegades with no line to win. Get your odds here at VIP.